I was emailing back and forth with a friend, talking about the sad passing of Ted Kennedy. I said how much I admired his statement, on learning his cancer was terminal, that he was "determined to make a good end". I was quite struck by her response: "Yes, making a good end is important, but the only way to do that is to make a good life upon which that ending has only to rest. Otherwise, it's like trying to say I love you after the breakup."

When I was fourteen, I was fondled by a pervert on the street, and when I had to describe him to the police, everyone tried to keep a straight face as I solemnly said that he looked a lot like the singer from Bronski Beat. Tonight, when I had to give a description to the cops, because a reporter identifying himself as from The Irish Sunday Independent was well inside my property and refusing to leave, I found myself reaching into my memory and coming up with “Like a light haired Dave Gahan from Depeche Mode”. Coincidence, or do all social deviants resemble 80’s synth icons? Perhaps unusual brain wiring leads me to make these associations? "I've been burgled my Neil Tennant! And the keyboardist from Erasure is doing a poo in my driveway!"
I’m being jokey about this when, the truth is, as he volleyed a barrage of inaccuracies about an old boyfriend, photographer at his side, I had to stop myself from crying. And then I went into the bathroom and lost it with fright.
Why did it freak me out so much? Because strangers who wish me nothing good found out where I live and walked right in. Because I was in my underwear, having just got in bed for a little nap after a long days work, when I heard my name being called from someone in my garden and went out to see what was happening. Because they taint the memory of a key relationship with someone who was so loving to me and my parents. And because two men, trespassing at night on one girl’s property, is really scary, no matter how absurd the context.
Evidently, this is also the week I gave a lengthy interview to a Polish tabloid talking about a love affair that has nothing to do with my life (uh, no, no I didn’t. I, in fact, said I wasn’t going to comment.) On balance, having words put in my mouth is probably one of the least bad things that’s ever happened to a Jew in Poland, so I count myself lucky. And that’s the weird thing I come back to, even as I curse the ugliness and sleaze. If this is the worst thing that’s going on in my life today, I am in the top percentile of the luckiest people who ever lived. Even with Dave Gahan in my garden, I still am.

Have I posted this before? Excuse me if I have. Oh, it breaks my heart every single time. You can draw a line from this scene in 'Splendour in The Grass' to Halle Berry's "Can you make me feel good?" breakdown in 'Monster's Ball'. Sex and grief can be such a thin line sometimes, for women. Lust and longing can act as portals or trap doors to craziness. The God Almodovar does it a lot. I really love films that go there ('Don't Look Now', 'Betty Blue', 'Head-On', 'Sex and Lucia', the original 'Cat People', 'Lovers Of the Arctic Circle'). If I had to assign a film for the imaginary film club I just invented, I'd say try and get hold of 'Lovers Of The Arctic Circle'. It's so beautiful. Try it, and tell me what you think.

Los Angeles, of an evening... 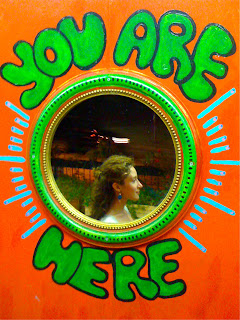 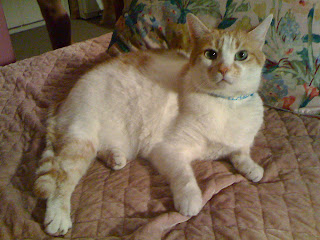 As regular readers of this blog are aware, Perry is a female feline, but used to be a fella. I believe this is the most lovingly Seamus has photographed a trans-sexual, since he shot The Soloist.

In a recent interview, I said (let me tell you what I actually said, not what ran) "If I talk to you for more than five minutes, I'm probably going to write about you" - an interpolation of a Taylor Swift quote (viva Nashville!) I mentioned here before. And it's true: my friends, family and lovers, not to mention the mailman, the bikini waxer, and this construction worker who once yelled something crazy at me on 8th avenue, are all in my writing in some form or another. Men become women, women become men, 40 year olds become wise beyond their years 16 year olds - there's even one short story where I combined an ex-boyfriend with a cat. The point is, everything I write is real experience strained through wild imagination. For me, that's inspiration. Stephen King, on the other hand, gave a lecture some years ago where he said every single thing he writes comes from one thought: "Wouldn't it be funny if...?"

Best email I've ever been sent: