Other than that, my hopes are really high. 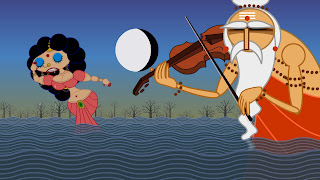 If you happen to be in New York, try and catch Nina Paley's 'Sita Sings The Blues' at the IFC Cinema on sixth avenue (It closes there December 31st but you can also download it at ninapaley.com). Sita is a movie so original, it's best I leave the review to A.O.Scott, of The New York Times:

"Animation is, at heart, the simplest form of cinema: a flutter of drawings fooling the eye into seeing motion. Nowadays, at least at feature length, the form tends to be a much bigger deal, with every year bringing can-you-top-this spectacles full of noisy, shiny figures and images.

“Sita Sings the Blues,” Nina Paley’s new film, which arrives in New York on Friday trailing festival love, is certainly ambitious and visually loaded. There are songs, bright colors and a story taken in part from one of the biggest, oldest epics in the world. But it is also modest, personal and, in spite of Ms. Paley’s use of digital vector graphic techniques, decidedly handmade. A Pixar or DreamWorks extravaganza typically concludes with a phone book’s worth of technical credits. Ms. Paley did everything in “Sita” — an amazingly eclectic, 82-minute tour de force — by herself.

Well, she didn’t sing the songs. Instead, she selected recordings from the early jazz singer Annette Hanshaw, whose voice, poised between heartbreak and soigné resignation, sets a mood of longing for this multilayered tale of love gone wrong. This music also provides an unlikely but seductive accompaniment to the main story, which comes from the Ramayana, an ancient and voluminous Indian epic.

Its hero is the blue-skinned Rama, avatar of the deity Vishnu, but Ms. Paley is more interested in Sita, his wife, whose devotion becomes both a romantic inspiration and a feminist cautionary tale. Her adventures are narrated by three shadow puppets who speak in the accents of modern Indian English and who quibble over details and interpretations.

Meanwhile, Sita, Rama and other characters from the Ramayana are rendered in various styles, including a “Betty Boop Goes Bollywood” look for the musical numbers and an illuminated-manuscript manner for the dramatic scenes.

All of this is entwined with the simpler, sadder, more drably drawn chronicle of a woman named Nina, whose longtime boyfriend, Dave, takes a job in India and eventually breaks her heart. This is a stripped-down, modernized variation on what happens to Sita, whose absolute love for Rama is repaid with suspicion, a humiliating trial by fire (to test her purity) and banishment. Hanshaw, crooning after inconstant or unkind lovers, completes the picture.

Not that “Sita Sings the Blues” will leave you wallowing in transhistorical, multicultural woe. On the contrary: Ms. Paley takes the pain in stride, and uses it as an occasion for whimsy and inventiveness. The movie’s playful spirit may represent a bit of defiant payback for whatever actual Dave may be out there; it shows that sometimes formal ingenuity can be the best revenge.

And the ingenuity of “Sita” — which evokes painting, collage, underground comic books, Mumbai musicals and “Yellow Submarine” (for starters) — is dazzling. Not busy, or overwhelming, or eye-popping. Just affecting, surprising and a lot of fun."

Just before getting the plane from LAX to meet up with my family and loved ones, ran through a list of instructions for the cat sitter. After checking food, litter and medical instructions, decided to cut "If you need to pass wind, do warn Perry in advance (otherwise he might scratch you)".

I love my agent dearly, and Scott Rudin has been my great benefactor this year, but when I came across this: 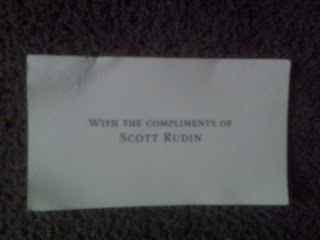 I knew I could put it to good use. Scott owns the film rights to just about every great book on the market, from ‘A Heartbreaking Work of Staggering Genius’ to ‘The Corrections’. I’ve been going around my house looking for the book that will most confuse my agent when I leave it on his desk, paper-clip’d with the compliments of Scott Rudin. I paused a moment on ‘Ramona Quimby, Age 8’, but it turned out that is actually in development. ‘Russian Criminal Tattoo Encyclopedia’, which is literally just pictures of Russian tattoos? I am not kidding, it is IN DEVELOPMENT. I dallied at ‘White Nights: Portrait of a film’, because how good would it be if Scott wanted to make a film about a book of stills from an existing film? The winner: 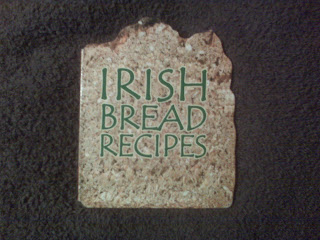 Logline? “This magnetic cookbook contains a delicious selection of bread recipes, including traditional favourites such as Soda Bread and Barm Brack”. Listen to me, Cliff: if we can attach Amy Adams, I think we have a hit.

I wake up spritely on tuesdays, because that's the day the New York Times has its science section. I know absolutely nothing about science. I consistently failed physics and chemistry in school. I once tried to pass a physics exam by writing 'nitrogen oxide' for every single answer, certain it must be right eventually. I find I get the most writing inspiration from the science section, precisely because I am so lost. I end up wandering onto strange topics that spark something stranger. They are also great lateral thinkers, the NY Times science writers. Below is the link to an article about circles in nature, inspired by a Kandinsky retrospective going on at the Guggenheim right now. The painting she mentions, 'Several Circles', is one of my favourites. It gratifies me that a science moron and a science genius can find common ground in a painting. It usually hangs at the Norton Simon in Pasadena, the most consistently inspiring museum I know.