I have decided to send my first night home cleaning out my cat's ears and listening to James Taylor. I did it in that order so Perry could better enjoy Taylor's sweet yet melancholic voice. Why are James Taylor's songs so peaceful yet so sad? And between Fire and Rain, Carolina In My Mind and Sweet Baby James, which is the saddest? It's like he is breaking your heart and mending it in the same breath. 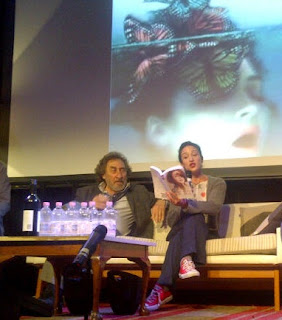 I feel very sad about leaving. It has been a once in a life time experience, though I hope very much to come back. I want to thank Chip Rolley of the Sydney Writer's Festival for asking me to be part of this amazing week. I got to share a stage with Howard Jacobson and have cocktails with Michael Cunningham! And found that they are both as beautiful as their writing. Last night Sydney got rainy and turned very film noir, and I fell even more in love with this city. Checking out of my harbour front room at the Sebel Pier One and heading for Tasmania now. You know, I really wasn't excited about coming here because I was anxious about doing the sixteen hour flight in coach. A good reminder in the form of a city: love always comes when you are least expecting it.

I am reading at Fullers in Hobart, Tasmania at 6pm tonight (wednesday 25th). Tomorrow(Thurs)  I read in Melbourne at The Hill of Content at 5pm and the next day in Brisbane (but let me double check where).

A reminder I am reading tonight from Your Voice In My Head, if you are in L.A and can make it there.

http://www.dailymail.co.uk/news/article-1384426/Water-Elephants-star-electrocuted-beaten-hooks-Shocking-new-video-shows-mistreatment.html
I never imagined I'd be backing a Daily Mail campaign of any sort, but we're on the same page here. It should be pretty obvious that performing, in a circus or for a Hollywood movie, does not come naturally to an elephant. But the torture Tai went through to end up being used as a money maker for Twentieth Century Fox is right here on camera. I've worked with the producer, Gil Netter, and he's a good guy, and had dinner with the star, Reese Witherspoon, who is a terrific girl. I hope they both donate any money they made on this film to animal protection charities, and furthermore, that they immediately distance themselves from the project, as Natalie Portman did when John Galliano's anti-semitism was caught on film. Hopefully you all boycott any circus that uses performing animals. Apply the same to movies, too.

As I suspected, a lot of readers consider my Dad the breakout star of 'Your Voice In My Head'. For the Jeffrey Forrest fans out there, here we are, in full effect. I used to lie, around this age, and say my Dad was Freddie Mercury. 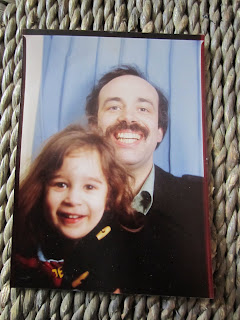 In conversation with Jon Ronson:


Emma Forrest Event at L&R from Anna Steadman on Vimeo.

Thank you, Maud Newton, for a lovely interview.
http://www.theawl.com/2011/05/when-your-shrink-dies-emma-forrests-therapy-memoir