Right. That's enough melancholia for one week. My dad sent me this wonderful Paul Simon clip. That little girl singing with him is how my soul feels today. That little girl inside my soul had me wake up and bake cranberry orange bread for breakfast to go with the newspaper. I love her! She's freestyling and life, a good life, a true life, is freestyle all the way. Sorry I couldn't enable the link, but cut and paste, you'll be terribly glad you did.

Michelle Williams strikes me as a fairly extraordinary woman, especially after this interview with Newsweek, in which she talks about Heath Ledger's death:

"I just wake up each day in a slightly different place - grief is like a moving river... It's a strange thing to say, because I'm at heart an optimistic person, but I would say in some ways it just gets worse. It's just that the more time that passes, the more you miss someone. In some ways it gets worse. That's what I would say."

Sometimes brilliant actors are shallow people with gifts that come from outside themselves (I would say, for example Peter Sellers and Marlon Brando). And other times, it's an unflinching emotional intellect that makes for a great actor, in which category Williams certainly falls.

'Grief Is Like A Moving River' would be a lovely name for a country album, don't you think?

For more than three decades, Eugene Allen worked in the White House, a black man unknown to the headlines. During some of those years, harsh segregation laws lay upon the land.

He trekked home every night to his wife, Helene, who kept him out of her kitchen.

At the White House, he worked closer to the dirty dishes than to the Oval Office. Helene didn't care; she just beamed with pride.

"I never missed a day of work," Allen said.

He was there while racial history was made: Brown vs. Board of Education, the Little Rock school crisis, the 1963 March on Washington, the cities burning, the civil rights bills, the assassinations.

When he started at the White House in 1952, he couldn't even use the public restrooms when he ventured back to his native Virginia. "We had never had anything," Allen, 89, recalled of black America at the time. "I was always hoping things would get better."

In its long history, the White House -- note the name -- has had a complex and vexing relationship with black Americans.

"The history is not so uneven at the lower level, in the kitchen," said Ted Sorensen, who served as counselor to President Kennedy. "In the kitchen, the folks have always been black. Even the folks at the door -- black."

Before Gene Allen landed his White House job, he worked as a waiter at a resort in Hot Springs, Va., and then at a country club in Washington.

He and wife Helene, 86, were sitting in the living room of their Washington home. Her voice was musical, in a Lena Horne kind of way. She called him "Honey." They met at a birthday party in 1942. He was too shy to ask for her number, so she tracked his down. They married a year later.

In 1952, a lady told him of a job opening in the White House. "I wasn't even looking for a job," he said. "I was happy where I was working, but she told me to go on over there and meet with a guy by the name of Alonzo Fields."

Fields was a maitre d', and he immediately liked Allen.

Allen was offered a job as a "pantry man." He washed dishes, stocked cabinets and shined silverware. He started at $2,400 a year.

There was, in time, a promotion to butler. "Shook the hand of all the presidents I ever worked for," he said.

"I was there, honey," Helene said. "In the back maybe. But I shook their hands too." She was referring to White House holiday parties, Easter egg hunts.

They have one son, Charles, who works as an investigator with the State Department.

"President Ford's birthday and my birthday were on the same day," he said. "He'd have a birthday party at the White House. Everybody would be there. And Mrs. Ford would say, 'It's Gene's birthday too!' "

And so they'd sing a little ditty to the butler. And the butler, who wore a tuxedo to work every day, would blush.

"Jack Kennedy was very nice," he went on. "And so was Mrs. Kennedy."

The whole family of President Carter made Helene chuckle: "They were country. And I'm talking Lillian and Rosalynn both." It came out as the highest compliment.

First Lady Nancy Reagan came looking for him in the kitchen one day. She wanted to remind him about the upcoming state dinner for German Chancellor Helmut Kohl. She told him he would not be working that night.

"She said, 'You and Helene are coming to the state dinner as guests of President Reagan and myself.' I'm telling you! I believe I'm the only butler to get invited to a state dinner."

Husbands and wives don't sit together at these events, and Helene was nervous about trying to make small talk with world leaders. "And my son said, 'Momma, just talk about your high school. They won't know the difference.'

"The senators were all talking about the colleges and universities that they went to," she said. "I was doing as much talking as they were.

"Had champagne that night," she said, looking over at her husband.

He just grinned: He was the man who stacked the champagne at the White House.

Colin L. Powell would become the highest ranking black of any White House to that point when he was named Reagan's national security advisor in 1987. Condoleezza Rice would have that position under President George W. Bush.

Gene Allen was promoted to maitre d' in 1980. He left the White House in 1986, after 34 years. President Reagan wrote him a sweet note. Nancy Reagan hugged him tight.

Interviewed at their home last week, Gene and Helene speculated about what it would mean if a black man were elected president.

"It'd be really something," he said.

"We're pretty much past the going-out stage," she said. "But you never know. If he gets in there, it'd sure be nice to go over there again."

They talked about praying to help Barack Obama get to the White House. They'd go vote together. She'd lean on her cane with one hand, and him with the other, while walking down to the precinct. And she'd get supper going afterward. They went over their election day plans more than once.

On Monday, Helene had a doctor's appointment. Gene woke and nudged her once, then again. He shuffled around to her side of the bed. He nudged Helene again.

He was all alone.

Some friends and family members rushed over. He wanted to make coffee. They had to shoo the butler out of the kitchen.

The lady he married 65 years ago will be buried today.

The butler cast his vote for Obama on Tuesday. He so missed telling his Helene about the black man bound for the Oval Office.

Richey Edwards was the first person I ever interviewed, when the Sunday Times hired me away from school at sixteen. He fascinated me and influenced me, both positively and negatively, at a pivotal age. He fascinated himself both positively and negatively. 'The Holy Bible', the Manics album that came out just as he vanished, is like his 'Guernica', a historical record in art of the war he lived with. 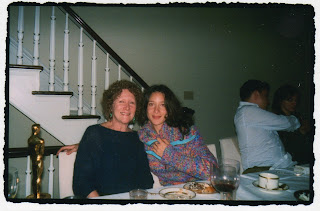 I just found this old Thanksgiving picture. I think I was twenty-five, living in New York. This is me and my mum and a gen-U-ine Oscar. I be schtum on whose it was, but I always say it was the Oscar for Best Supporting Mum. I was in a period of serious despair in that photo, but I look beatific. I know I was very happy in that moment. Funny how life works.

(I really liked that sweater. A pre-neuter cat made sweet, sweet love to it and I never got the smell out).


I'm just writing
and talking out my book with a cat
and, yes, someone I loved died,
in a terribly unfair way
but they're right here in these pages....