This is me with my Grandpa. I am the one on the right. 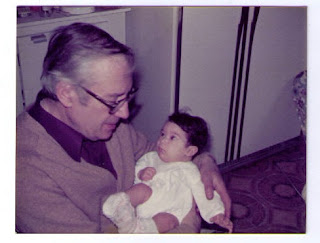 It looks like I have something very important in my hand and am worried he might nick it. It also looks like I am wearing a baby toupee. It's real.

I don't feel bad for babies with no hair, unless they have a little ribbon velcro'd to their head, and then I feel really terrible for them. Not having something isn't a bad thing, but drawing attention to what it is you don't have, as if hopeful things might change - it's always a mistake.

Instead of attaching a velcro bow, mothers should boast "Look at my baby's fabulously shaped skull!" And we should do that to ourselves, in life, as well.

I haven't done any journalism in a very long time. The screen writing has taken over, which has been nice timing since I've come to feel increasingly uncomfortable with the lack of control a journalist has over the headline, editing and selling of a story. An interview is a set up I feel especially wary of, even though it's always been my stronger suit. There just isn't a way to make the situation organic. Either it's awkward because you're strangers or it's awkward because you feel like instant friends. All that said, when The Guardian asked me to interview The Yeah Yeah Yeahs, I caved. I really love this band and see something truly original in Karen O. The story is in today (link above). This is probably my favourite song and video they've done, and, odd though it may seem, I see, in the passion and strangeness, a link back to the Odetta clip I posted:

It's demented how late I came to the stories of Flannery O'Connor, but then she was demented, so I don't feel as bad. Orson Welles said to the director of my favourite film, 'Paper Moon', "It's such a good name, you should just release the title!" You could just release O'Connor's titles - "Everything That Rises Must Converge", "Wise Blood" - and you'd know she was a great writer. "A Good Man Is Hard To Find" is a sensible place to start if you're new to O'Connor, but be warned, things never end as expected. I wasn't warned and I had to throw the book across the room. Her world view is extraordinary and unsparing.

An interesting thing about her is that she is a female writer - the only one I can think of right now - who didn't write about sex or relationships. She just spun incredible stories.

There's nothing as relaxing as a good biography, and Brad Gooch's just released 'Flannery', is fantastic. There's a story about O'Connor, in a Savannah Catholic school as a little girl in the 1930's: she would read voraciously and then write reviews on the flyleaf. On Lewis Carroll's 'Alice's Adventures in Wonderland' she scribbled "Awful. I wouldn't read this book". On Shirley Watkins' 'Georgina Finds Herself', one of a series of 'Books For Girls', she wrote "This is the worst book I ever read next to 'Pinnochio'". 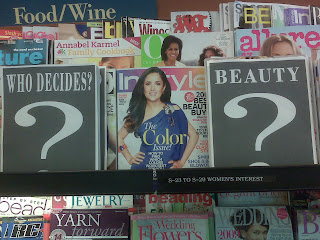 Anger/joy/love/loss? Odetta feels it so hard, and it thrills me every time I listen.