The misogyny in Todd Phillips' films - if you've seen 'Old School' or 'Road Trip' you'll know that wives and girlfriends are nagging killjoys and teenage girls just need to get f***ed - came to its logical conclusion in 'The Hangover', which sought to make Mike Tyson, convicted of rape in 1991, into a loveable, family friendly figure of fun. Judging by the cheers Tyson got as a presenter at the Golden Globes last night, Phillips succeeded. Tyson did the film as an "opportunity to show off his giddy side," the writer-director told Movieline, "which I thought was really cool". People seem to have written off that night as if it was some sort of nebulous date-rape (maybe she was drunk, or said "yes" then "no", or he wasn't gracious afterwards...or something). This was, in fact, a terrifying attack on a seventeen year old girl who barricaded herself in the bathroom to escape him, until he punched his way through. The conviction hinged on brutal forensic evidence concerning the internal injuries he left her with. Mike Tyson is a convicted rapist, a convicted wife beater, a vicious and violent abuser of women, and the fact that a Hollywood audience applauded him last night makes me feel ashamed to be part of this community.

I realize those are two infuriating stories about men twisting religion to suit their own moral bankruptcy. So I wanted to post about a new book called 'The Harvard Psychedelic Club' by Don Lattin, a riveting account of how Timothy Leary, Ram Dass, Huston Smith, and Andrew Weil "killed the fifties and ushered in a New Age for America". These four remarkable figures were on the same campus, at the same time. Timothy Leary is the most famous - for encouraging the country to 'Turn On, Tune In and Drop Out'. but the one I knew the least about was Huston Smith. An ordained Methodist minister, he practised every world religion, introduced the Dalai Lama to the West and educated generations of Americans to adopt a more tolerant, inclusive attitude to other cultures' beliefs. In a 1950's public-television program shown at dinner time, he casually blew America's mind by climbing onto his desk, in a three piece suit, to demonstrate the lotus position.

Guest blog by our friend, the mysterious 'Stone':

The Archbishop of Granada, Javier Martínez, recently compared the new Spanish Abortion law - which had been passed in the Spanish Parliament with the votes of the majority - to Hitler’s crimes and added that if a woman has a termination, men are entitled to abuse her. “Si la mujer aborta, el varón puede abusar de ella”.

The Archbishop has now declared that he was being misunderstood and that he had actually meant to say that abortion provides males with an excuse to abuse women. Well, excuse me, but since when have rape and sexual abuse become excusable. Rapists and abusive men do not need a reason or an excuse for their behaviour, they are dysfunctional individuals who are in dire need of therapy. There is absolutely no behavior that would justify rape or abuse – whether a woman has had an abortion, whether she is wearing red lipstick, a mini skirt, or whether she’s into pole dancing – absolutely nothing should make you a potential victim of sexual harrassment or rape.

Through his statement, the Archbishop of Granada is giving every rapist and every male that displays aggressive and dysfunctional behaviour towards women carte blanche. At the same time Martínez reduces all males to helpless slaves to their sex drives who cannot control themselves in front of a woman.

This type of attitude towards women has been predominant in the Catholic Church ever since Eve’s original sin. Discrimination and crime against women have a long history in the Catholic Church – how many women were burnt alive during and after the Middle Ages? The Archbishop of Granada makes no exception to the rule, as he perpetuates the very same attitude. Seemingly, in the mindset of the Catholic Church, women are not supposed to make decisions with regard to their own bodies, while men are at the same time entitled to claim dominion over these bodies of ours.

I am Pat Robertson and I am a piece of shit


I don't even think it's drunken-ness. It's awesomeness.

I was in quite a bad mood, this morning, until I met a dog called 'Bear' at the coffee shop (apologies for wearing a denim tuxedo - I had just rolled out of bed.) 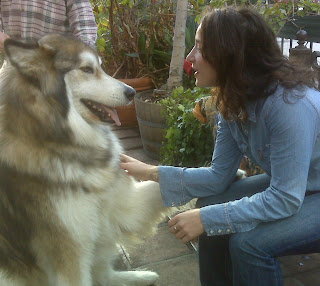 Not to mention the time I've been spending across the street, with a rabbit named 'Napoleon'. 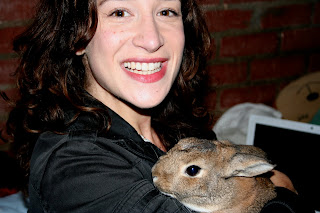 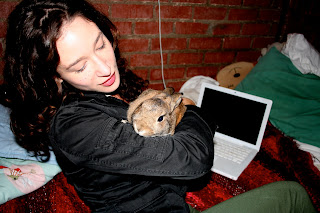 Trying to get in on the good times, Perry brought me this dead lizard: 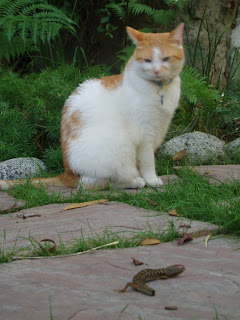 I know it's awfully late in life for me to realize I have an opinion about Mariah Carey. I always thought she was very pretty and had an opera singer's range. I'd even heard a sweet story from a journalist friend who had interviewed her on the phone and broken down in tears because her Grandma had died that week...at the end of the interview, the journalist's doorbell rang and it was a delivery of condolence flowers from Mariah (my friend never knew how she arranged it all while they were still speaking). But her music never engaged - too clean, none of Mary J Blige's grit or sorrow - so she's never really registered much for me. Then I saw 'Precious' and, I swear, as good as everybody is in that film, she is extraordinarily good and really, really does deserve a best supporting actress nod. "I like Mariah Carey", I decided, and then I remembered that she's a grown-up woman who named her album 'Charmbracelet' and I upgraded my opinion to "I love her". The deal was sealed by this mention in the NY Times review of her December 31st concert:

"The holiday happens when Mariah Carey says it happens, which is why, on Thursday night at Madison Square Garden, the New Year's Eve countdown was a minute after the fact".