Shaye has written another tremendous entry over at lalasmom.com, this one grappling with the idea that some religious followers believe suicide is a punishable sin:

"When I first started casting about for places online to connect with others experiencing a loss similar to my own, a search for blogs on suicide returned a high number of Christian sites whose sole purpose was to proselytize their belief that suicide is a sin and an act of selfishness to boot. Do they expect someone who is considering suicide to find their site and feel helped by a righteous finger pointing at them, accusing them of being a selfish sinner? If their goal is to ease the pain of the grief-stricken? Demonizing the person who killed themselves isn't likely to help; the mourner must now imagine their friend or parent, sibling or child, spending eternity in hell."

Someone who has only ever been vicious to me has written a letter saying they have a mental illness and need my help. I always want to help, always, but at the end of the day I do believe that beneath your mental illness (or your alcoholism, or your homelessness) beneath all these real and serious hardships, you still have your personality. So I referred the person to a good counselling service and wished them the best because I wasn't the right one to talk to. Heavy heart... 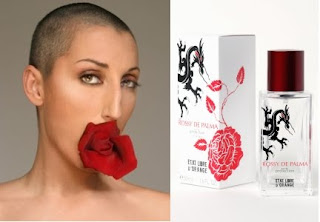 The Almodovar muse with the glorious profile now has her own perfume 'Protection by Rossy De Palma'. I would like dearly to have her protection, plus, her scent smells incredibly good. You can buy it or even just buy a sample at luckyscent.com. If you're in LA, you can try it at the Luckyscent store on Beverly blvd. I have become something of a scent junkie since I randomly walked in and struck up a conversation. I am reading from my memoir May 11th at Book Soup, but will also be doing a one off event at Luckyscent in June, where a discussion of the book will be accompanied by perfumes that mimic the moods. And, yes, there is a (very beautiful) perfume called 'Ophelia'.

Any Kate Bush fans out there have feelings about the James Joyce estate giving her permission to use Molly Bloom's soliloquy in an updated version of 'The Sensual World'? Here it is (it's about the most beautiful writing in the English language):

"...I was a Flower of the mountain yes when I put the rose in my hair like the Andalusian girls used or shall I wear a red yes and how he kissed me under the Moorish wall and I thought well as well him as another and then I asked him with my eyes to ask again yes and then he asked me would I yes to say yes my mountain flower and first I put my arms around him yes and drew him down to me so he could feel my breasts all perfume yes and his heart was going like mad and yes I said yes I will Yes. "

Forrest, Emma. Your Voice in My Head. Other. May 2011. 240p. ISBN 9781590514467. $22.95. MEMOIR
At 22, Emma Forrest had moved to New York from London, was writing for the Guardian, was on the verge of publishing her first novel, and began mentally coming apart. She found a savior in her longtime psychiatrist Dr. R., returning to his care following a failed suicide attempt. Readers follow Forrest through heartache and triumph, through the ravages of mania and self-destruction. The witty and self-aware Forrest has assembled a story with a touchingly flawed, human voice.
What I'm Telling My Friends: I will be highly annoyed if this is marketed as "the Colin Farrell story." Yes, the movie star's break-up with Forrest is an element of the story. But his is not the Voice of the title. The woman can write, and this is the story of her pain.

You've been asking where to find the infamous Elizabeth Taylor essay I wrote way back in 2001. Here it is:
http://www.telegraph.co.uk/culture/4727434/Lessons-in-Liz.html

Go and see 'Hanna' this weekend if you're in the U.S, or May 6th if you're in the U.K. It's directed by by friend Joe Wright. Though he made his name on 'Pride and Prejudice' and 'Atonement', he started his career doing visuals for The Chemical Brothers (who provide the soundtrack to this hit-girl joyride). There are several dark re-imaginings of fairytales in the Hollywood pipeline right now (Red Riding Hood, Snow White, Sleeping Beauty). 'Hanna' is a completely original fairytale and you've never seen anything like it.

My sister is the best:

"I am preparing to watch a film about coming to terms with the death of Gerard Butler".