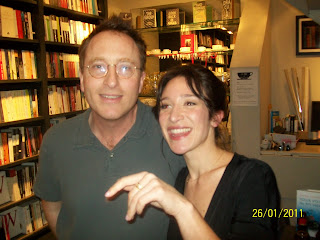 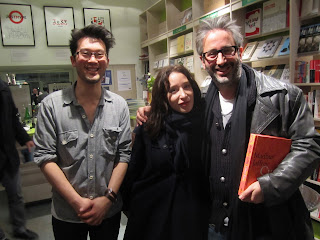 I did a reading on tuesday at the Lutyens and Rubinstein bookstore in Notting Hill, and one on thursday at Clerkenwell Tales. Jon Ronson hosted the Notting Hill event and David Baddiel very kindly did Clerkenwell. Both audiences were very smart and asked great questions so thank you everyone who came down and to the good people in both stores who helped set everything up. Jon has a new book out in the summer called 'The Psychopath Test' (he did test me, in front of a packed room, too). David has his fourth novel out in March, 'The Death of Eli Gould'. L-R, Peter Ho, (owner of the excellent Clerkenwell Tales), small lady, David Baddiel (comedian, novelist, Madhur Jaffrey enthusiast.) 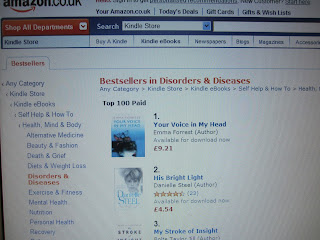 At Clerkenwell Tales, a lovely independent bookstore at:
30 Exmouth Market
Islington, Greater London EC1R 4
020 7713 8135
After the reading, I will be in conversation with the brilliant David Baddiel - it's free but do call to get a space.

"Re-read Julie Myerson," insists Mum, "She's extremely complimentary about your gifts as a writer. What she's saying she dislikes is you."
That's true!

A rave by someone who completely gets it in The Sunday Times and a hatchet job in The Observer by someone who does not (even weirder, within that newspaper, a rave in the Observer magazine and a hatchet job in The Observer review). Bi-polar train here we come!!
ps: It's all very well saying it's smarter not to read reviews, but when I wake up, my blackberry is buzzing with all of them from twenty different sources.
pps: very sweetly, my Mum will not admit the Observer is a bad review. "It's...mixed".

The reading on the 26th has now sold out, so I'm doing one the next night, Jan 27th, at the lovely independent bookstore, Clerkenwell Tales, at 6.30 for 7. The address is:

Yes, the libelous Limelife piece has been forwarded to me, and the lawyers are already on it. I swear to God, the internet is like the f***ing wild west...

Blast from the past

So, if you've seen the Daily Mail article, which is subbed and headlined the way the Daily Mail does these things, you'll have seen a photo of me at twenty. It doesn't say the picture is almost fifteen years old - they must have just pulled it from their archive. That was the absolute worst time of my life and it's all there in my face and posture. I was so bulimic, that was really all I did, seven times a day. I'd started to get a rash on my right hand from sticking it down my throat. I'd hacked off all my hair because I was trying not to cut. It's a painful picture for me to see and I guess it has double impact because I get so caught up in words - my own and others - I forget very often, the effect pictures can have. It'd be an interesting project to frame, side by side, the photo that you think captures you at your most unhappy and the one that gets you at your happiest. Maybe wear them in a locket round your neck and make sure the happy side is always touching your heart.

Your Voice In my Head reading

Thank you all, again, for the lovely comments. Yes, I am doing a London book reading on Wednesday January 26th, 6.30 for 7pm at the Lutyens and Rubinstein book store at 21 Kensington Park Road, W11. I am extremely honoured to say that the great Jon Ronson will host a Q and A session. It's a fiver to get in but that comes with wine. To reserve a place email anna@lutyensrubinstein.co.uk

Saw someone reading my memoir tonight on the tube! I've seen it in book stores here already but not actually in someone's hands. Peeped over their shoulder (to try and see how it ends...) 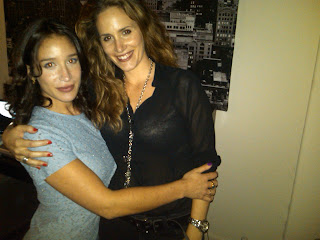 This is me with one of my closest friends, Andrea. You know how charity shops like you to donate "gently worn" clothes? I call Andrea my "gently worn" friend. When I was 11, my best friend, Lizzie, broke my heart by moving to a new school and getting a new best friend. Andrea. I was jealous and heart-achey. But, as adults, Lizzie and I reconnected (she was just as funny and kind as in childhood) and it turned out my mysterious rival, Andrea, had moved out to L.A the same month as me. Andrea and I instantly hit it off, and helped each other ease into this vast, strange city. That Lizzie had loved us both intensely, suffused this new friendship with a depth and trust we didn't actually have yet, like a nostalgia for things you've never experienced. The girl who bullied me the absolute worst at school was Greek, so it's strangely significant that Andrea, my adult-world protector, is Greek too!

I want to stress that I have not named - anywhere - the anonymous figures in my book. I know it's driving certain people mad that I won't name them, to the point of putting words in my mouth, but this is my stance. My psychiatrist and my three significant love interests are all anonymous for a reason. Below is part of an essay on the process of writing memoir, which appears in the current issue of Psychologies. They want me to direct you to the magazine for the story in it's entirety...

"There’s a store in Los Angeles called Luckyscent, at which I have spent many a paycheck on perfume. Coming home with the classic Fracas, the cult Loukhoum, the obscure Magical Moon, I’ve been chasing a dream that intimates and passersby alike would smell me and nod, “Oh, I get her! I understand what she’s about!” I would never have to try to explain myself – moreover, I would never fail to explain myself. I wanted perfume as a stand in for written memoir. I found a lot of beautiful scents. But I never found “me”.

That idea of scent has returned to me as reviews begin to come in. What’s sour to some can be sweet to others and what some find overpowering, others find subtle. I said to my sister “I honestly believe that if the contents of this book are the worst things that will happen to me, I have been incredibly lucky” and she replied “I don’t agree with you”. I was shocked. I don’t feel sorry for myself, at all. But I have to wrestle with the notion that others might.

Writing this memoir kept my head above water. It saved me. Which is great, but why publish it? There’s the idea it may help other people. But, truthfully, the more I’ve turned the question over in my head, the more I have just one answer: because I’m a writer."

Between The Guardian excerpt and today's Sunday Times interview, I want to thank you all very, very much for your kind comments. Funnily enough, my sister said "Emma, go look on Twitter, there's really lovely stuff about your excerpt" and then fifteen minutes later called back to say "Uh, don't go look on Twitter".

I should also say: I have an essay in the new issue of Elle UK. It's about how it feels to no longer be the youngest person in the room. There's a very beautiful lady called Cheryl Cole on the cover (she had to be explained to me and I *think* I understand. I have been out of this country for a very long time...)I also have a story in the new issue of Psychologies magazine, about the process of writing memoir.

I also want to apologize, as I'm signed up to twitter but haven't figured out how to use it. HOW DO I SEND A TWIT?

The Guardian - my paper of choice - are excerpting my book in their magazine on Saturday. I'd assumed it would be a stand alone chapter, so I got a shock when I saw they'd edited an entire book down to an article. I know I delve into some difficult subject matter and a lot of early readers have asked how it felt to put the worst of myself on the page. My writing came very easily. What's a challenge for me is seeing it now reconfigured. Obviously, it is great for a book to get a newspaper excerpt and I am very grateful to be in The Guardian at all. And so grateful it's brought you to me.

I was thrilled that The Observer put my book on their hotlist for 2011, but pretty gutted that they described it thus:

This year, women writers are lining up to demonstrate that the misery memoir is alive and well. In January, US-residing British journalist Emma Forrest – former beau of Colin Farrell – brings out Your Voice in My Head, a memoir of her struggle with depression. In the same month, Throwing Muses singer Kristin Hersh publishes Paradoxical Undressing, the story of her descent into, and recovery from, schizophrenia. In April comes Margaux Fragoso's Tiger, Tiger, chronicling her long relationship with a man four decades older than her, beginning when she was seven."

The experiences in my book are sometimes terribly sad, sometimes terribly funny, but all of them are like thunderstorms to me: they changed the landscape of my soul. I don't see any of those experiences in terms of "misery". I think the term "misery memoir" is applied to female writers to denigrate women's stories in general. It's all just ladies, moaning about lady things! Silly me for viewing the stories I put to paper as "human".

I will say I'm in great company. I've read Kristen Hersh's memoir, as she is a long time heroine of mine. What do you know: her book is quite brilliant and also damn funny.

I won't dwell on being labeled "the former beau of Colin Farrell"? I simply was not aware! But delighted to imagine the bonnet I wore at the 18th century costume ball.