I just got my hot little hands on the new issue of Vogue, in which there is a most beautiful spread on my number 1 girl, Kat Dennings (it's the "shape" issue and she's photographed representing the hourglass figure.) The cover is a divine Rihanna, so strong, so feminine. I'd mentioned both ladies in an upcoming essay on beauty for 'Psychologies'magazine - that one of the things I find most attractive in a face is the same thing I find most attractive in a personality: surprising juxtapositions (Kat's pale body and dark hair, Rihanna's green eyes and caramel skin.) I rhapsodised, too, about Florence Welch, and not just because she gave my memoir such an amazing review (it's on the cover of the upcoming paperback though I've yet to meet her). I could never muster interest in any model because I love watching women in motion and Florence is someone who just seems - in the best way - possessed. But my favourite thing - and this is something I feel with Dennings, is that she's from another era. That anachronism, that sense of being out of time, is something I find endlessly appealing.

She has the most wonderful style appreciation in today's NY Times (I've been having a hard time make it linkable so do google it). She talks about how - having short legs and a huge bust - she was not a fit for designers the way Audrey Hepburn and Grace Kelly were (and honestly, the self-deluded web "comment-haters" would have an absolute field day today, criticizing the young womans weight and proportions), but that she dressed even better than a style icon: she dressed for devouring life. This is, you'll see, a very moving article, more so than most of the obituaries. 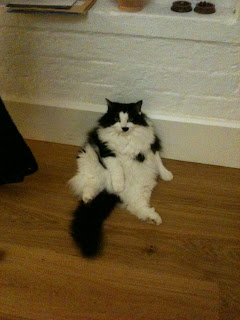 Just in case you're having a down day, here is a photo of my boyfriend's cat begging for spare change in a hallway.

Well, she wasn't a great actress (she said so herself), there were more natural beauties (she was especially anxious about Burton working with Ava Gardner in 'Night Of The Iguana' and the novelist Edna O'Brien on 'X, Y and Zee'). But she was a pioneer and a buccaneer - the first woman to divorce publicly (and often), the first to fight the stigma and fear around AIDS. The living embodiment of the triumph of hope over experience (is this why she was so devoted to her Judaism?), she never, ever stopped believing in love (so much so that the Vatican deemed her an 'erotic vagrant'). And nothing ever killed her. Until it did. Rest in peace.

Apparently Susan Boyle just parodied this video for Comic Relief in the U.K. So I just rewatched this (a vague memory from childhood, nostalgia for something I'm not even sure I ever experienced in the first place) and it made me realize: cheesy as they are, there is something so primal in the great power ballads. "Now at least I know I know him well", oh my goodness, that line slays me! Haven't you felt that when something's over? Like only being able to actually taste the chocolate when you get to the very last one in the box? Pat Benatar wrecks me, too, especially 'We Belong' from 'The Legend of Billie Jean': "We belong to the sounds of the words we've both fallen under"...seriously, the hairs on my neck stand on end. But you're listening to someone who featured Cher's 'Just Like Jesse James' ever so prominently in the last script I sold. "Your heart is down for the count and you knoooow you're gonna lose it!" So kids - what's your favourite power ballad?
ps: itunes just asked me "Are you sure you wish to purchase 'I Know Him So Well' by Barbara Dickson and Elaine Paige? Judgmental little shit!

Just saw Paul Mazursky's 'Bob and Carol and Ted and Alice' at The New Beverly cinema and then walked across the street for cheesecake at Sussina. Natalie Wood is such a beauty (she's like a delicate pencil sketch of Mila Kunis) but I think this is the best performance I've seen from her. Sometimes I love L.A so much. There are people who do care about preserving real cinema! There are people who do eat full fat double dairy cakes!

Ms.Kiefer is a Canadian legend and it was a real honour to talk to her before I left. The friend I mention in the interview writes the blog lalasmom.com about life after her daughters suicide. On a lighter note, I should probably remember not to wear green being 5 foot 1 and all. I look more like a yiddish leprechaun than I'd intended.

In case of emergency

Whilst adapting my memoir as a movie, a visual motif I keep coming back to is the fire escape outside my old apartment. I used to use it to climb - with her permission - into my friend Teeter's living room in the next building. There's a line in my book: "In New York City a mutual fire escape is more profound than a mutual orgasm." I wonder if our friendship would've been so intense without that fire escape. I never had to use it for its stated purpose. But I did use it to watch a lot of sunrises and eat some stunning deli sandwiches and have some kisses and meditate without knowing I was meditating. NYC fire escape stories anyone?